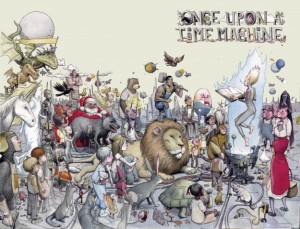 This review is short because I still don’t have access to my computer, but I figured I should at least post something.

Once Upon a Time Machine was great. The best part was the set-up. A woman arrives at a publishing headquarters to accept a job as a comics writer only to find that the big boss is planning a major cut to the comics department and she may not have a job after all. Only because he knew her father does she even gain entrance to the big boss’ office. Once in she mesmerizes him with a pitch for an amazing sci-fi update of a fairy tale. He is impressed but only to the extent that he will keep her on as long as she continually brings in fresh and equally impressive material. This intro is itself a re-imagining of One Thousand and One Nights, where an Arabian Sultan spares a virgin’s life night after night because of her story-telling prowess. I read this far… and I was impressed.

I don’t even know where to start with the rest of this volume. EPIC would be a good place to start, I guess. Seriously, this book just goes on and on. Every piece has a different team of writers and artists which means that, if you don’t like one story, you can just go on to the next one. There is a bit of something for everybody. While the tales are mostly sci-fi, there is a lot of variation. There is fantasy, mythology, anime-style action, post-apocalyptic, dystopian, etc. John Henry competing against robots? Pinocchio as a holographic tutor? Hell Yes!!!!

What I really enjoyed about this volume, however, was being introduced to fairy tales I was unaware of. The creators were not afraid to take on obscure stories. I was constantly googling the original tales and gained a working knowledge of stories from many cultures. It was like a novel approach to introduction to world folk-tales 101.